In Plain Sight: Reflections Past & Actions Present in Durham’s Geer Cemetery is an outdoor educational exhibit examining the history of Durham, NC’s first public African American cemetery.  The exhibit runs through April 3, 2021 and is spearheaded by Nicholas Levy and Debra Taylor Gonzales of the Friends of Geer Cemetery (FoGC), a non-profit organization dedicated to the protection, preservation, and reclamation of Geer Cemetery and its attendant histories.  In Plain Sight came together through countless hours of volunteer research, writing, and installation work to recover and share the history of this space and the individuals buried within it. According to the exhibition’s website, this collaborative, community effort is intended to “challenge us to confront the persistence of long-standing inequity—in death as well as in life.” Composed of ten panels lining the old carriage track of the cemetery, In Plain Sight explores the role of the African American community in Durham from end of Reconstruction and through a large part of the Jim Crow era. By examining the community’s relationship to the cemetery and retelling the life stories of those laid to rest there, this exhibition presents a somewhat unique approach through which to understand Durham’s flourishing Black community from the end of the nineteenth century through the first half of the twentieth.

Taking the space of burial as an archival document through which to study the history of a city or community is an interesting and fruitful approach, provided one takes the time to also consider how flawed that document is. Especially in the case of cemeteries, like Geer, that served marginalized communities and, thus, were subject to various forms of erasure and abandonment, it is critical to approach that history from a variety of angles. Developing various data-driven approaches to cemetery history in my other work, I saw here an ideal opportunity to combine an aggregate analysis of the cemetery’s known burials with the detailed, case study work that others had been working on.

Geer Cemetery was founded in March of 1877 when three African American men—John O’Daniel, Nelson Mitchell, and Willis/Willie Moore—purchased a two-acre tract of land from Frederick and Polly Geer upon which to establish the first public cemetery for Durham’s African American community. Although there is no known document accounting for all of the burial activity that took place in what would become known as Geer Cemetery, it is estimated that over two thousand burials took place there between its founding in 1877 and its last recorded burial in 1945. Over the ensuing decades, Geer Cemetery became entirely unrecognizable, heavily overgrown and largely inaccessible. Grassroots efforts spearheaded by Kelly Bryant in the 1990s would ultimately lead to, in 2003, the formation of the Friends of Geer Cemetery (FoGC).

Since then, volunteers have painstakingly worked to compile a comprehensive list of burials, reach out to and engage with descendants, reconstruct the stories of individuals and families buried in Geer and share those histories with the community. Efforts to document burials in Geer date back to 1937, when the Works Progress Administration (WPA) conducted a survey of the cemetery (there recorded as Ferrell Road Cemetery); however the bulk of these efforts has resulted from the work of dedicated volunteers, who, since the formation of the FoGC have meticulously transcribed death certificates and burial cards from the public record.

When I came onto the In Plain Sight project in November 2020, there was already a database of approximately 1,500 individuals with varying levels of detail about their lives. Most commonly, we only knew the life dates and gender since the majority of this work had been done manually over the years. Additional information on individuals and families was collected and well-organized, as volunteers had been regularly doing genealogical research, yet there was no single dataset that combined all of what we knew about Geer’s permanent residents in a single, centrally located document. Though I was met with some skepticism at first—both because of the time constraints and the knowledge that an aggregate analysis would be inherently flawed since records of the earliest burials were not often documented at all since death certificates for Durham only became available in September of 1909—I was able to convince a group of folks to work with me to create a workable dataset. Using the list of people that the FoGC had already compiled, I pulled as much information for these individuals as possible off of the OCRed death certificates available on FamilySearch.org, and then used OpenRefine, a data cleaning tool, to organize this information into a dataset that could be both analyzed and continually improved as more information on Geer burials was uncovered by our researchers. Setting my data crunching team to work with the raw data, they diligently dove into the FoGC’s files to fill in the information that was missing from FamilySearch, until we had a dataset representing over 1,700 individuals with life dates, last known addresses, causes of death, occupations, marital status, relatives, attending doctors, undertakers, and more. The aggregate collection of these details provided us with unique insights into the circumstances of everyday life (and death) amongst Durham’s Black community.

Once the data had been gathered and cleaned for a final time, I set to work pulling some figures and creating a series of visualizations that could be used to put the exhibition work into a bigger context. Because we knew that the data largely underreported those who died prior to September 1909, it was critical that we make these limitations known; however, it was still a useful exercise both for showing what we did know about the majority of the cemetery’s activity and pointing out clearly what we did not know and thus needed to learn more about. One of our most useful visualizations, for example, was a bar chart that we used to show the documented annual burials. 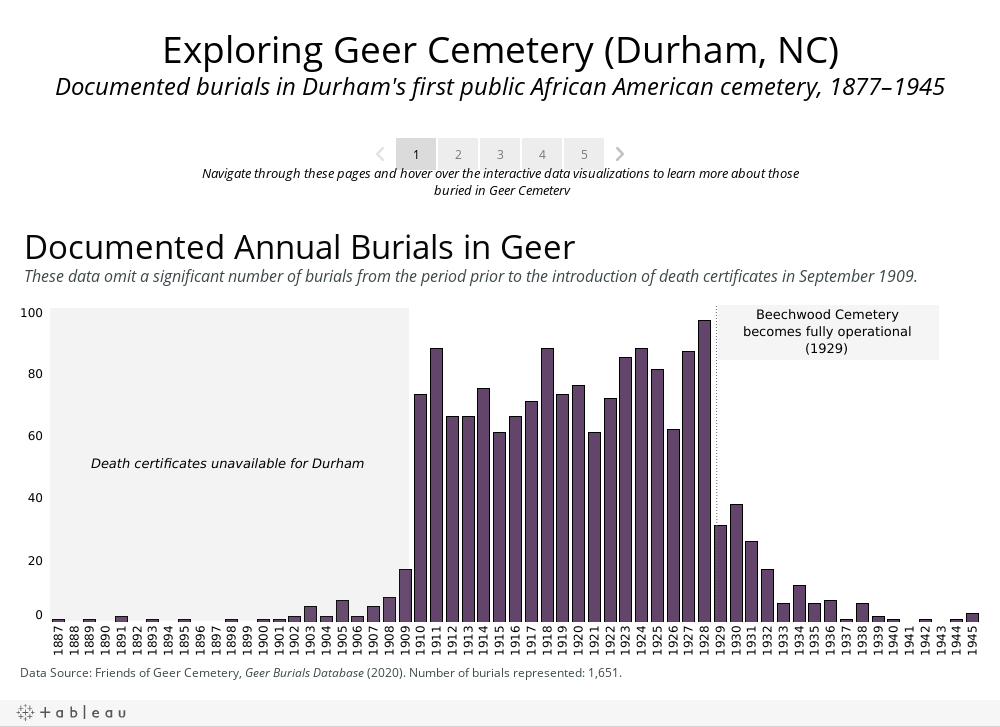 Here we see that the period prior to 1909 is sparse because of a lack of documentation, but that activity did significantly decline in Geer after 1929, when the doctrine of “separate but equal” granted Durham a public African American burial ground, Beechwood Cemetery, controlled by the city and intended as a counterpart to Durham’s major white cemetery, Maplewood Cemetery, which had been established in 1872.

Our dataset also allowed us to examine how many of those buried in Geer were known to have been born before the abolition of enslavement. Looking at all those with a known date of birth before 1865, we found that about 20% had been born prior to Abolition. In the exhibition, placed in the context of the specific stories of those we had known to have been enslaved, this information allowed us to demonstrate an idea of how many similar stories there might have been.

One recurring critique of using data in the humanities, and particularly of using data to talk about individuals who have historically been dehumanized, is that these methods further anonymize and dehumanize. This is all the more problematic because this renewed dehumanization comes in the cloak of good work: an almost woke version of history that only manages to perpetuate biases and white supremacist narratives. This is an important critique that historian Dr. Jessica Marie Johnson has superbly written about in her 2018 article, “Markup Bodies: Black [Life] Studies and Slavery [Death] Studies at the Digital Crossroads.” In contemplating the Trans-Atlantic Slave Trade Database, Dr. Johnson writes: “Data without an accompanying humanistic analysis — an exploration of the world of the enslaved from their own perspective — served to further obscure the social and political realities of black diasporic life under slavery.” It is exactly this idea that underlies the data work that we incorporated into In Plain Sight. One cannot rely solely on the data available to tell BIPOC histories, as these data more often than not represent documents written and collected by the hands of the oppressors; they will always be biased, and they will never tell you the whole story. But, when placed in the context of detailed, humanistic research based on case studies and other forms of primary evidence, data can be useful in uncovering BIPOC histories and even in critiquing the data sources themselves.

Finally, in keeping with the FoGC’s mission of outreach and education, the data that we compiled in conjunction with the exhibition have now been restructured into a searchable online database that will soon go live on the FoGC’s new website. Here, researchers and descendants alike will be able to freely explore information about those we know to be buried in Geer and continue to learn and retell these stories.

Special thanks to everyone who contributed to the data collection process for In Plain Sight, namely: Kylie Broderick, Israel Dominguez, Tim Foley, Nicholas Levy, Jason Norris, Mary Slater and Carissa Trotta. Additional thanks are also due to Fiene Leunissen, who worked to develop a web-scraping method for these data.